Our planet still has exceptional wildlife. But one must travel far to witness some of the last remaining unspoiled areas. Arriving in Sorong brought back old memories of my last visit and it felt so right.

After our very first day of diving, before setting sail south to Misool, we visited a small beautiful island. A perfect postcard jewel. Setting foot on its long lazy beach towards the end of the afternoon, just as the last jet ski buzzed back to the awful mother ship that spawned it, we found a lonesome man collecting the day’s plastic litter in large bags.

He told us he had moved here to flee the mad buzzings of the city, in search for peace and nature. Now, every day, hundreds of tourists invade the beach of the small island he calls home, shedding plastic litter like the physical manifestations of their stress on vacation. Every evening he collects the plastic to ship it back to the mainland, and every morning the waves of jetski-propelled crowds ebb and flow, so blissfully carefree. This modern Sisyphus was out-posted at the first crossroad of our trip, like a warning to be conscious of our every action, here more than anywhere perhaps. Don’t squander the shores of paradise. Plastic pollution is a rampant problem in Indonesia, but it is far from being the only threat to marine ecosystems. 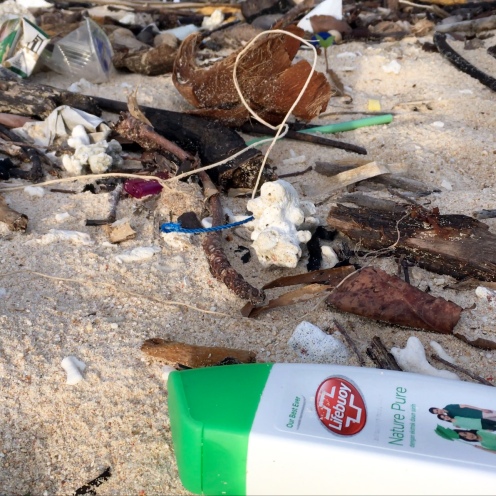 Why am I here? I mean in Raja Ampat, not in the universe. I met legendary marine conservationist Dr. Rod Salm during the World Conservation Congress in Hawaii. Rod is one of the visionary conservationists who initiated the Marine Protected Area program of Raja Ampat, ten years ago. I asked him if he could, from the summit of his outstanding career, say what the missing silver bullet is for conservation to succeed. He laughed and replied: “people don’t even have their sh*t together, how could there be a silver bullet?” What he meant of course is that most of us live with little or no understanding of our daily impact on nature. Carelessly. Mindlessly. Like the jetski tourist sprinkling the shores of paradise with plastic. Water, air, nature… are all blind spots into which we pour our externalities. How can we become more mindful?

I got a little sidetracked there, but it does tie back into the story of the trip. I told Rod about the project to revisit the places my father had explored half a century ago and to document the changes, and understand the why. He put me in touch with Jos Pet, one of the owners of the Seven Seas liveaboard to explore possible synergies and using their ship as a platform to revisit the South East Asia locations. Jos was very kind to ask me to join this trip, which was leaving in only a few weeks and had one free bed.

Exploring Raja Ampat on the Seven Seas vessel was an amazing adventure. Contemplating the complex landscapes of stone sculpted by time and the elements, bathing for hours in the heart of the coral triangle, dive after dive, the images of luxuriant coral and exuberant fish began to paint the inside of my eyelids, diluting desires, infiltrating dreams. In this heaven, where days blurred together, one creature would occasionally manifest its angelic grace: the oceanic manta ray.

Swiveling between the pillars of the divers’ bubbles, the manta rays come to a stationary hover to clean, casting upon our exhilarated faces and flailing bodies a magnanimous gaze. Later, I become lost in an endless field of corals, the dancing sunlight above raining undulating energy into the chloroplasts of the zooxanthella who feed them. Concentric clouds of fish pulsate around the corals to an imperceptible rhythm, dancing like a membrane between home and the hunt.

Above the water and between every dive, I launch the drone into the sky. Gaining new perspective, higher vantage, it feels like a widening of the mind as well as the field of view. My spirit is transferred to the small flying machine and its tiny camera. I fly at full speed only a few feet above the sea, then leap up to 400 feet to gain the overview. 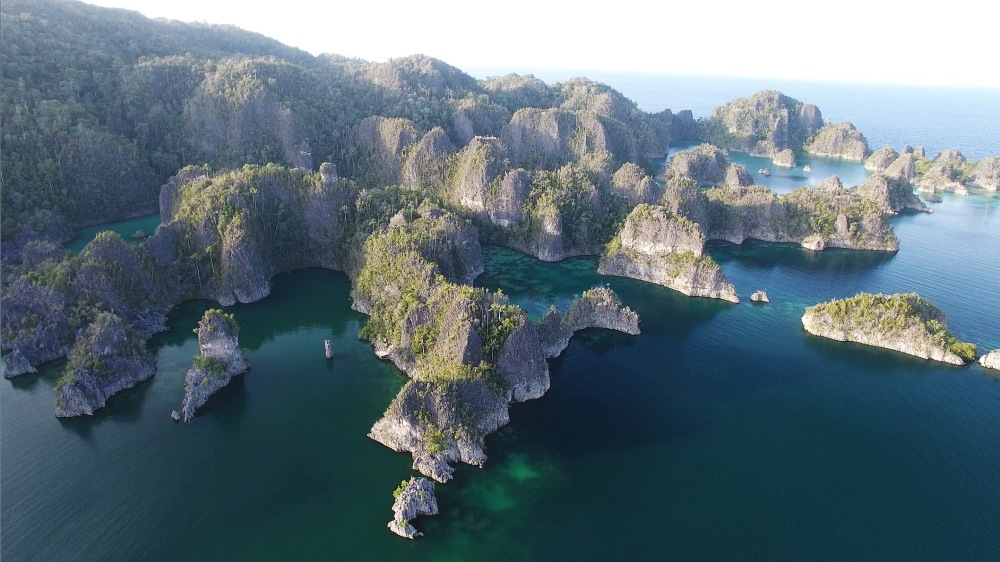 Scouting each island, I perhaps make the first observation ever of a hidden lake. None of the crew or the captain knew about it. It has probably been found by satellite long ago, but in case not, I baptized it Lake PY. After a quick flyby and identifying the best access route however, I was not permitted to climb the razor-sharp stone cliff that leads to it. Hopefully, this will be the object of a future expedition, and new discoveries! As we visit areas that have been declared no-take marine protected areas, we encounter fishermen, illegally casting nets and lines from their needle-like vessels. One man who converted from fishing to making coconut oil makes a small fortune selling us his goods. Overall, the coral was amazing. This heart of the coral triangle contains more biodiversity within a football field sized area than the entire Caribbean Sea.

Only a few dive sites had an impressive amount of fish. Frail, scarce, and terrorized sharks could sometimes be seen in the dark depths. Plastic was very present everywhere, mostly floating at the surface. Together with the passengers and crew, we must have collected a dozen kilos of it from the sea during the trip. Because the ship served any fish at all, and because passengers would have it on a near-daily basis, I’ve had to wonder how much of that fish came from or impacted this MPA or another one. I tried to follow Ryan, my bunkmate, into going vegetarian, but rapidly tired of the tempe and tofu. Meat consumption contributes to roughly one third of global greenhouse gas emissions. 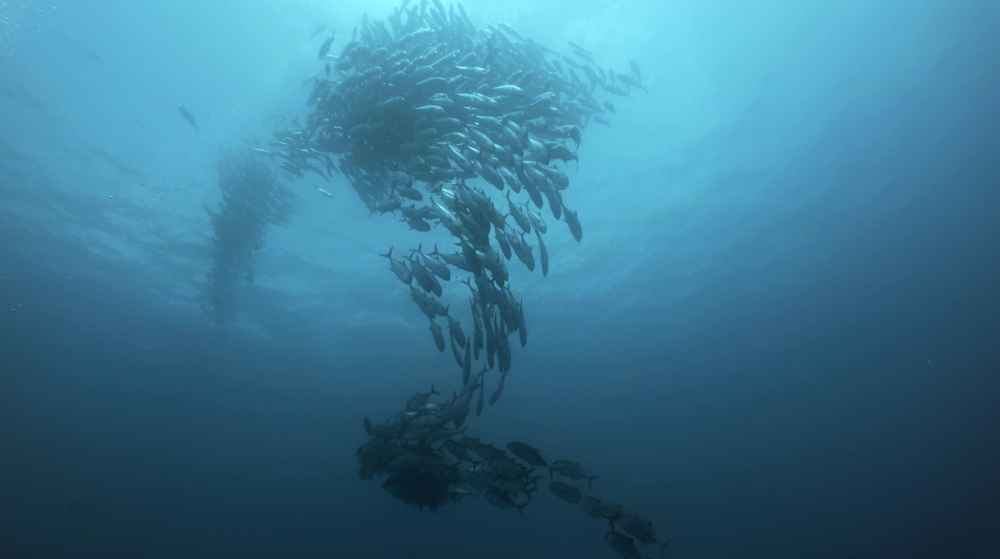 By choice or by fate, we are done eating the sea. Every year our taxes subsidize the 30+ billion dollars worldwide overfishing effort, making each one of us an active participant in the devastation of the ocean, regardless of our consumption choices. Fish plays such an important role for the food security of hundreds of millions of people worldwide. It should and could be better managed. Sustainably managing marine resources could trigger societal breakthrough of the magnitude of the invention of agriculture 12,000 years ago.

In Raja Ampat, one of the last remaining coral gardens of the planet, which has now been protected with no-take zones for 10 years, there is still ways to go to provide alternate livelihoods to local populations, and alternate meals and habits to visiting tourists. As fish stocks dwindle worldwide, this heart of the coral triangle needs improved surveillance and enforcement to protect its biological resources from local and international covetousness. Improved zoning and the creation of specific fishing corridors could ensure long-term subsistence fishing while conserving key sites.

Re-discovering the ship-littered harbor that’s Sorong after ten days at sea, Karen, one of the passengers, exclaimed: “wow. so much metal”. In this small harbor, handfuls of fortunate souls board wooden sailboats with eyes and minds wide open to absorb every instant. Those who disembark on the pier struggle to retain the precious images of untamed nature in their minds amidst the assaults of advertising announcements and screaming screens. 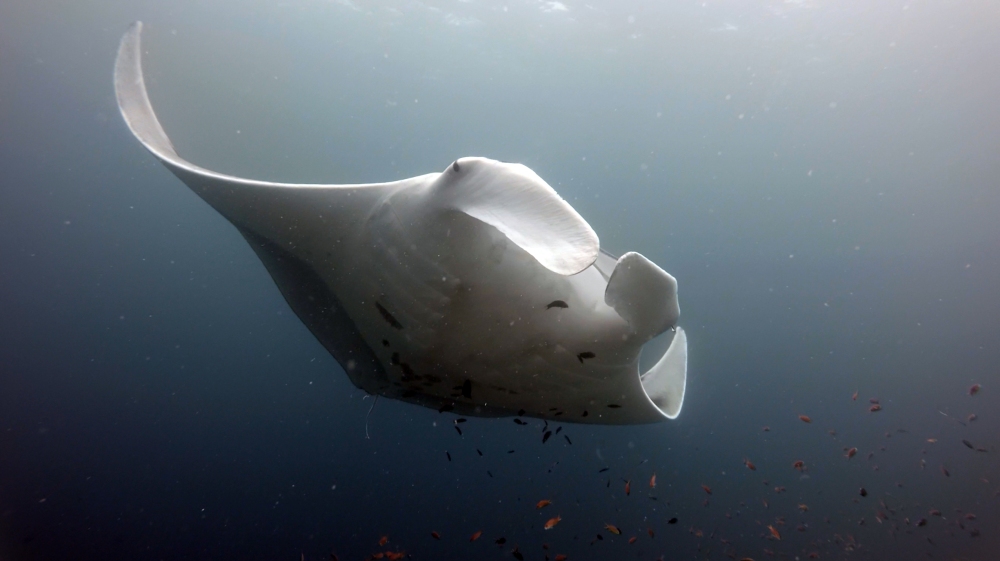 Special thanks to the Seven Seas team and Big Blue lights for sponsoring me on this trip. Check out the Misool Foundation for more on local conservation in Raja Ampat.